Artists Present Their Decks and Images For You
Forum rules
This forum is intended for use by artists of all types of cards as a gallery of your work.

Feel free to present your work any way you'd like. You are encouraged to post images along with any text or links. We are looking for presentations of work from the perspective of the person(s) who made it.

If you are not the artist but would like to present a deck, perhaps the Reviews forum is more appropriate for that.
Post Reply
18 posts

From the creator of The Shakespeare Tarot comes a new deck:
The Beatles Tarot

The Beatles Tarot is based on the RWS deck, with some acknowledgment of the Marseilles. Each suit corresponds to each Beatle:

The Minor Arcana explores each individual Beatle - who they were as people - during their time with the legendary band, as well as before and after:

The Majors follow each Beatle album chronologically, as well as featuring people integral to the Beatles' story. As with the traditional tarot, the Majors also represent each card's larger intrinsic qualities.

The creator of the deck has spent 2 years making The Beatles Tarot. Working closely with a Beatles expert, the two have also produced a companion book to accompany the deck. In it are 200 pages of anecdote, history, card exegesis, and colour pictures.

We discussed the deck already - as soon as I had a mail from the creator, I opened a thread here ;-)

If you're the creator, then it's great you introduced the deck also here!
Deck of the Week
Nemia's deck and book lists, tarot calendar
Show post links
Top

Thanks Nemia - yes, I am the creator. and I'm happy to answer any questions regarding the deck.

Very very interesting decks. Do you have a webshop for all your creations? Then I'll put a link also in the independent shop section. And thank you for sending me the e-mail update. You can see it propelled me into action immediately :-)
Deck of the Week
Nemia's deck and book lists, tarot calendar
Show post links
Top

i haven't a webshop, no. but each of the 3 decks i've made so far have their own site, with various amounts of info. they are as follows:
http://www.shakespearetarot.com/
https://www.beatlestarot.com/
https://chrisleech.wixsite.com/goldenageofhollywood
Show post links
Top 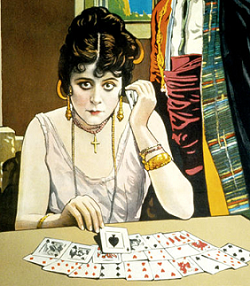 It looks well thought-out, and that's important.
I like the Golden Age of Hollywood one, too. You're working on one about the silent era? You could almost do a whole deck with just Chaney Sr.

ha ha - yes, Chaney could certainly appear in a number of cameos throughout the deck. I hope to have the Silver Screen Tarot ready by early in the New Year.
Yes, a lot of study and thought went into The Beatles Tarot - I've been studying The Beatles for 30 years, and the deck and companion book took 2 years to complete.
Show post links
Top

Interesting. I'm not really a Beatles fan and had believed Sgt. Pepper to be the massive influence changing music, but having listened to how other artists changed compared to 1966 I wonder if 1967 really grew out of Revolver?
Previously known as 2dogs.
Show post links
Top

there were many influences going on culturally during that time, and to try to credit one album or one anything is a faulty enterprise. to wit: i think sgt. pepper is massively over-rated. but that of course is just my opinion and hardly germane. of course the beatles were a huge influence on their musical peers, even as they were influenced themselves by artists and in someways - albeit at the pop vanguard - reflected the route pop music was already taking and, one could argue, almost had to take.
Show post links
Top

Yes, I was struck though by the change in rock that became "psychedelic" in 1967 with the use of effects and orchestration. "Tomorrow Never Knows" is the one song I really enjoy and I was interested to find McCartney had been influenced on that by Stockhausen from 1956. Also there are the loops and reversed sounds that go back to Pierre Schaeffer in 1948.
Previously known as 2dogs.
Show post links
Top
Post Reply
18 posts

Return to “The Artists' Gallery”