A lot has been written about the Thoth; it's an inexhaustible deck. Over the years, I have found some works of art or esoteric illustrations that may have inspired some of the Thoth's images.

Lust is one of the cards that may have been inspired by a number of works of art. This aquamanile (a vessel for water used to wash hands in a religious or everyday context) from the Lehmann collection at the Metropolitan museum: 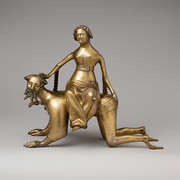 is from the Netherlands, 14th/15th century. It's just one example of the well-known (apocryphal) story about Aristotle's humiliation at the hands of the infamous Phyllis who rides him like a horse.

The motif of the "abandoned female" subjugating the incarnation of wisdom, Aristotle, is definitely misogynist and anti-sensual. I can just imagine how Crowley would take this motif and turn it around.

Another well-known woman riding in triumph is the Whore of Babylon, especially in Blake's version:

Look at the snakey clouds above this Whore with papist tiara (from a Lutheran pamphlet).

I can't prove it and the correspondence between Crowley and Harris doesn't mention any such artworks, but I'm quite sure they knew them. To prove that would be a nice little research project and more than I can do here!

I also found in Joseph Campbell's Mythologies of the East an illustration that reminded me of Lust.

I asked on AT whether anyone knew more since I don't know enough about Indian culture and myth but nothing came of it. Most probably it's the goddess Durga - I can't say. But I can see that

Campbell's book doesn't give further information about this image. I find the composite effect of the body fascinating and the fat paws remind me strongly of the Thoth image, even if we have only one head here.

In short, since Lust is one of the most radical re-interpretations of the traditional tarot card, it's likely that the new design was influenced visually by older sources - Phyllis, the Whore of Babylon and/or a triumphant lion goddess. Phyllis and the Whore of Babylon reflect the old Aeon's virtues and are depicted in a negative light, the triumphant, strong, unapologetic lion goddess the values of the new Aeon. 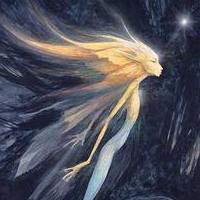 Question for you Nemia... Who is this many-headed beast in all the pictures?
Come faeries take me out of this dull world. For I would ride with you upon the wind and dance upon the mountains like a flame. - W B Yeats

I put in a link to the Wikipedia page of the Whore of Babylon - and there it's written:


The "great whore", of the biblical Book of Revelation is featured in chapters 17 and 18.

17:1 And there came one of the seven angels which had the seven vials, and talked with me, saying unto me, Come hither; I will shew unto thee the judgment of the great whore that sitteth upon many waters:

17:3 So he carried me away in the spirit into the wilderness: and I saw a woman sit upon a scarlet coloured beast, full of names of blasphemy, having seven heads and ten horns.

It's the Christian incarnation of everything that is tempting, wild and well, my English vocabulary ends here! Anything that is Lust.

For Crowley, to replace the virtuous gentle maiden of Strength (herself heiress to Hercules, the hero who chose Virtue) with this incarnation of sexy evil was a resounding slap into the face of Christian morality.

ETA: She's the Scarlet Woman of popular culture. She's Christianity's fear of women and sexuality incarnate - and Christianity's obsessive linking of the two. Woman is sexually determined, sexuality by women. This discourse continues btw even in our age of political correctness.

It would be funny to call Crowley a proto-Feminist because he wasn't - but at least he went to town with the Whore of Babylon as cardinal virtue.

I notice that without background knowledge of Christian ethics, Crowley's work loses some of its sting...
Deck of the Week
Nemia's deck and book lists, tarot calendar
Show post links
Top

Aah, lol my mistake, I was naughty and didn't click on the links!

And yes I can see how that would be a huge slap in the face!
Come faeries take me out of this dull world. For I would ride with you upon the wind and dance upon the mountains like a flame. - W B Yeats

In his own religious system, Thelema, Crowley made the Whore of Babylon a Goddess.
Deck of the Week
Nemia's deck and book lists, tarot calendar
Show post links
Top

So, if I'm reading this right, the Beast is also her consort Chaos?
Come faeries take me out of this dull world. For I would ride with you upon the wind and dance upon the mountains like a flame. - W B Yeats

I'm no expert on Thelema but I guess so :-)
Deck of the Week
Nemia's deck and book lists, tarot calendar
Show post links
Top

This is interesting Nemia. I like how you've posted up these similar works of art

I drew this for whether I should restart a card of the day practice. It suggests I ought to; it would increase my enthusiasm for life, add another layer of meaning that would help me be more present in the moment.
Previously known as 2dogs.
Show post links
Top