Does anyone else have and love the Rosetta Tarot? I have now the wonderful Golden Papyrus edition and the black-bordered pocket edition, and I couldn't tell you which is more beautiful (will add more informative pictures later).

I hope I'll find the time to write a full-fledged review, but let me tell you what I love about this deck. It's like discovering the missing link between the Thoth and the Tabula Mundi, and those are my two most important decks. The Rosetta is rougher, rawer and feistier than the Tabula Mundi. The art style is more expressive and less perfect - and the experiments with different artistic mediums turned out very well. They make every suit stand out. That's most obvious in the Swords suit where Meleen used etching - a medium that has a strong character of its own and reflects the fact that you don't work on smooth paper but on copper plates which resist your hand. You can really see that resistance of the material in the lines, and I love it. You SEE that Swords mean struggle, even if everything goes well - there is always resistance to overcome with the Swords.

The Cups in water colours are gentler but not as "watery" as in other decks like Dreaming Way; it's quite opaque but the colours glow. I would have love seeing Meleen tackle wax/encaustic painting like in Fayoum portraits for the Wands, it would have injected them with heat and it's a technique the Egyptians loved. But that's just my dreamworld, the deck is perfect as it is. And actually, with the impasto the majors look a lot like encaustic paintings anyway.

Printed with papyrus borders, the cards look like illuminated paintings from a lost manuscript where the dry heat of the desert sand preserved the papyrus perfectly, and the colours stand out.

On black borders, the colours look even stronger and seem to float in space.

I can't tell you which looks more beautiful - the hieroglyphic inscriptions on the Papyrus edition and the golden inner frame are spectacular in their own right, but the black-bordered pocket edition is amazing, too.

The iconography is closer to the Thoth than I expected but that's only at a first glance - then you start seeing everywhere Meleen's symbolic imagination take over. Things come alive everywhere, some of them will grow up to appear in the Tabula Mundi - and I nearly regret I knew the Tabula Mundi before (NO obviously I regret only the days I spent without the TM!!!). It must have been so exciting for Thoth lovers to hold the Rosetta in their hands when it came out first.

I don't have the Book of Seshet but the book of M gives me what I need to know right now, maybe I'll buy it later.

It's a brilliant, brilliant deck.

Here are some links:

AT pictures and AT review by Sapienza

wow! i may have to spring for the app and give it a test drive! the black border looks great and would look great edged, too. in black or even a deep dark red, i’m thinking.

i wonder if fool’s dog has straightened out issues with the crashing journals on their apps.... 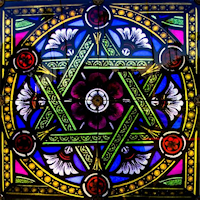 A few months ago I decided I wanted the Rosetta with the black borders which is no longer available so I got the mini version in the tin. I had to have this deck because of the love I have for the beautiful rose backs. So, then I got the papyrus borders. This has become one of my favorite decks. I love the hieroglyphics because it hides the name and titles of the cards. Who reads hieroglyphics, right? It adds some mystery to the cards and their meanings.

Meleen says herself, the reason to redo the deck from a black border to papyrus border is because of the chipping of the black and unfortunatly, they do chip. What is really cool is the significater card that comes with this deck. You put in your order whatever you want to name it and she writes it in hieroglyphics. I chose the obvious word "significater". Seeker would be another name you may want on it or even your own name. Just be aware when you order the deck, you will be asked what you want your significater card to say. But she also included an extra significater card and the hieroglyphics alphabet so you can create your own also. She even included what I think was, is a practice card to practice on as well. (Thats what ended up in my order anyway). I won't add much more to this because Nemia described the artwork very well. I had no idea I would love this deck so much. IMO the papyrus border is nicer looking than the black borders. I'm glad I decided to get it because once it's gone, it's gone.
Show post links
Top

I too have the pocket version in the tin. It is indeed an awesome deck. And it surely warrants its own subforum, which I just created and moved your topic to, Nemia. Thanks for bringing this up!